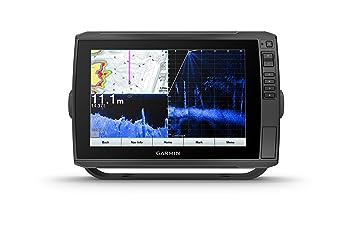 There’s plenty of support and stability in this fishfinder. The 10-inch touchscreen has all the secrets that will make your fishing dreams come true. It’s ultra HD with three different real-time imaging features. This excludes LiveScope and 2D CHIRP!

So you can imagine how clear and defined this fishfinder really is. With Worldwide Basemap, it works around the globe. This is a step up from the previous models which only allow BlueChart g3 or LakeVu g3. These are not as extensive as Worldwide Basemap.

Having said that, let’s look at the important features of this fishfinder.

There are plenty of ways you can go fishing in a smart way. You don’t have to ask around or rely on standard technology for all your best efforts. You need features that improve your chances of finding fish. Such as these…

Whether you’re new to fishing or know the ropes around here. You can always rely on the features of a high-quality fishfinder to get you through.

The 10-inch touchscreen plugs in directly to the mount. You can quickly disconnect the screen for easier storage. The cord plugs are durable and well-insulated. So you can always remove it from the power for safekeeping.

The display is color with LED backlight. It’s a large screen with a bright resolution. So everything is crisp, clear, and trackable. The screen’s also waterproof which takes a load off!

You have multiple ports to connect this fishfinder with. The most impressive of them all is the NMEA 2000 connectivity. You can hook it up with digital switches, audio systems, and sensors.

The wireless connectivity allows you to update information as you go along. You can access your customized charts and all other settings via their phone app. Though I don’t think that’s necessary. Because this 10-inch fishfinder detaches from the mount like your very own tablet! Plus, it’s touchscreen which makes accessibility easier and faster.

The Garmin ECHOMAP Ultra 102sv delivers what most fishers want. And that is built-in support from all sonar capabilities. This includes CHIRP sonar, ClearVu, and SideVu.

Both are ultra-HD, no doubt, to extend farther and deeper.

And if you’d like to stick to the basics but in a more concise manner. You can make the most of its 2D High-Wide CHIRP feature. It runs on a single transducer mode.

Thankfully, this fishfinder has a built-in transducer. With a conical beam that reaches down to 800 ft.

The ClearVu sonar capability is good for deep fish finders. It uses an oval beam to cast its frequency range upon. And it goes directly under the boat down to 200 ft. You can elevate the frequency on this thing using the 425 to 845 kHz.

The SideVu works the same as ClearVu in that it’s an oval beam. But rather than jumping under the boat, it tracks each side up to 125 ft. Depending on what frequency you select, you can lengthen your reach up to 500 ft.

For better tracking and stability, Garmin gives you plenty of smaller features. Such as fish icons, recording, alarm, and circular flasher mode.

Reading water for fishing is a headache when you don’t know what you’re looking for.

But I don’t have to tell you again why having Worldwide Basemap is beneficial. This Garmin ECHOMAP unit works with all other Garmin charts. Giving you access to upgrade to more specific maps such as BlueChart g3, LakeVu g3, etc.

With the help of these maps, you can chart your entire route. All thanks to the newest Garmin Quickdraw Contours feature. It isn’t lacking in precision when you want to map your lake. Nor does it limit your 2D sonar only to a specific map.

It’s bad enough that boat noise can draw the fish away. But you need accurate mapping structures to catch them before they disperse. With GPS, you can reveal all the nasty details of your route such as rock beds. The GPS updates position every 10 seconds and also tracks in high speed.

You can save up to 5,000 waypoints, 100 routes, and 50 tracks. The memory is copious, accurate, and productive. All this you can keep updating with the help of Wi-Fi and its free phone app.

Customizable interface with touchscreen and keypad.
You have access to the whole map inventory.
It offers SailAssist and Auto Guidance for beginners.
Easy to install, mount, and maintain.
The mount is adjustable and detachable.

No radar support from Garmin.
No Navionics mapping feature.

I’ve said all there is to know about the Garmin ECHOMAP Ultra 102sv Fishfinder. How can you beat that? Not only is this fishfinder a great choice for anglers. But it’s also a safe and upcoming choice.

It sums up what a fisher needs effortlessly. And it’s obvious by the way it’s made that the creators of this unit take fishing very seriously. Maybe it’s time you, too, take a long and hard look at what fishing really is.

It’s more than catching fish: it’s using the right tools to track and find them first. The Garmin ECHOMAP Ultra 102sv puts it all there. And it sounds so much better than using a makeshift GPS that is never good enough.

What is it that you like in a fishfinder? In the old days, fishers used to rely on intuition and past experiences to catch fish. Now, we’ve adopted a smarter and more effective way of finding fish. The good news is: you don’t have to do it alone anymore!